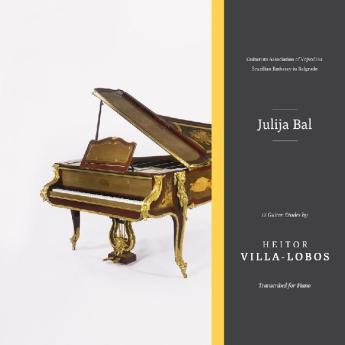 Publishing of this CD was provided by Brazilian Embassy in Belgrade

While performing her transcriptions for the piano at the IBLA Grand Prize 2008 competition in Italy, Julija Bal’s originality as composer and pianist drew the attention of the public and music critics alike. As the laureate of the competition and the winner of  the „Villa Lobos“ special prize, Julija Bal performed on the IBLA Winners concert tour in Carnegie Hall with encore request and great critical acclaim.

Her winners concert tour included over fifteen performances in Virginia, North Dakota, Arkansas, and New York. At the end of the tour, she became the Ambassador of good will of Arkansas. Invited by the organizers, from 2009 she became one of the youngest jury members at the same competition. Her performing style being described as an original combination of powerful individuality and temperament as well as peculiar techniques of sound creating have attracted the audience and the Competition jury when she performed her own virtuosic transcriptions of Schubert, Albéniz and Villa Lobos for the piano.

She finished basic and secondary music school / piano at “Isidor Bajic”music School in Novi Sad under mentorship of prof. Biljana Dabic. At 1990, she became a member of The Group for Talented Performers at the Academy of Arts called “Group 0” in correspondence with all music schools among ex Yugoslavia under the mentorship of prof. Kemal Gekic. 1998. She entered Bachelor studies of piano at the Academy of Arts in Novi Sad, first under the mentorship of prof. Kemal Gekic and then prof. Jokut Mihailovic. At 2004  She entered magisterial studies of piano under the mentorship of prof. Biljana Gorunovic. At 2009 she finished magisterial exam with the best grade and got the title Magister. She has worked together with professors K.Gekic, J. Mihailovic, B.Dabic, Alan Fraser (Canada-Serbia), L. Pogorelic (Croatia), A. Valdma (Estonia), K. Bogino (France), I. Jones (England), S. Panovska (Malesia) and others.

Julija Bal has done a series of notable performances throughout  Serbia , Italy , Germany ,Greece, Poland and the United States of America such as Virginia , North Dakota , Arkansas , New York ). She performed at festivals such as Nomus, Val Tidone, A-fest, IBLA, 1000 Tone, Festival of the Guitar in Novi Sad , 2009, where she gave the premiere performance of the 12 transcriptions of Villa Lobos Etudes under the patronage of Brazilian Embassy. She gave  master classes and lectures in University Radford (Virginia / USA), at the University in Minot (North Dakota / USA) , University in Wroclaw (Poland) and among schools in cities in Poland, and among cities in Serbia.

She did the recitals of chamber music as a member of the Chamber group “Ad Libitum” i.e. the piano duet J.Bal – J.Bajic, and she cooperated with the members of the “Bassiona Amorosa” quartet as well as with the Jewish Chamber Choir of “Hasira”. Last summer she performed on the “Summer Music Fest of Novi Sad”, when she played various styles of Brazilian music together with Brazilian family Tomé. Julija cooperated with radio and TV stations such as NBC, Polish Radio, RTS and many others. Her compositions were presented on the First World Convention of EPTA 2009, which covers the achievements in the field of piano music.

From 2004 until 2011 she has worked as a professor of piano and piano accompanist at the music school  “Josip Slavenski” in Novi Sad, and from 2011 She teaches comparative piano at the Academy of Arts in Novi Sad.